Disaster Follows Us Everywhere (and That's a Good Thing) 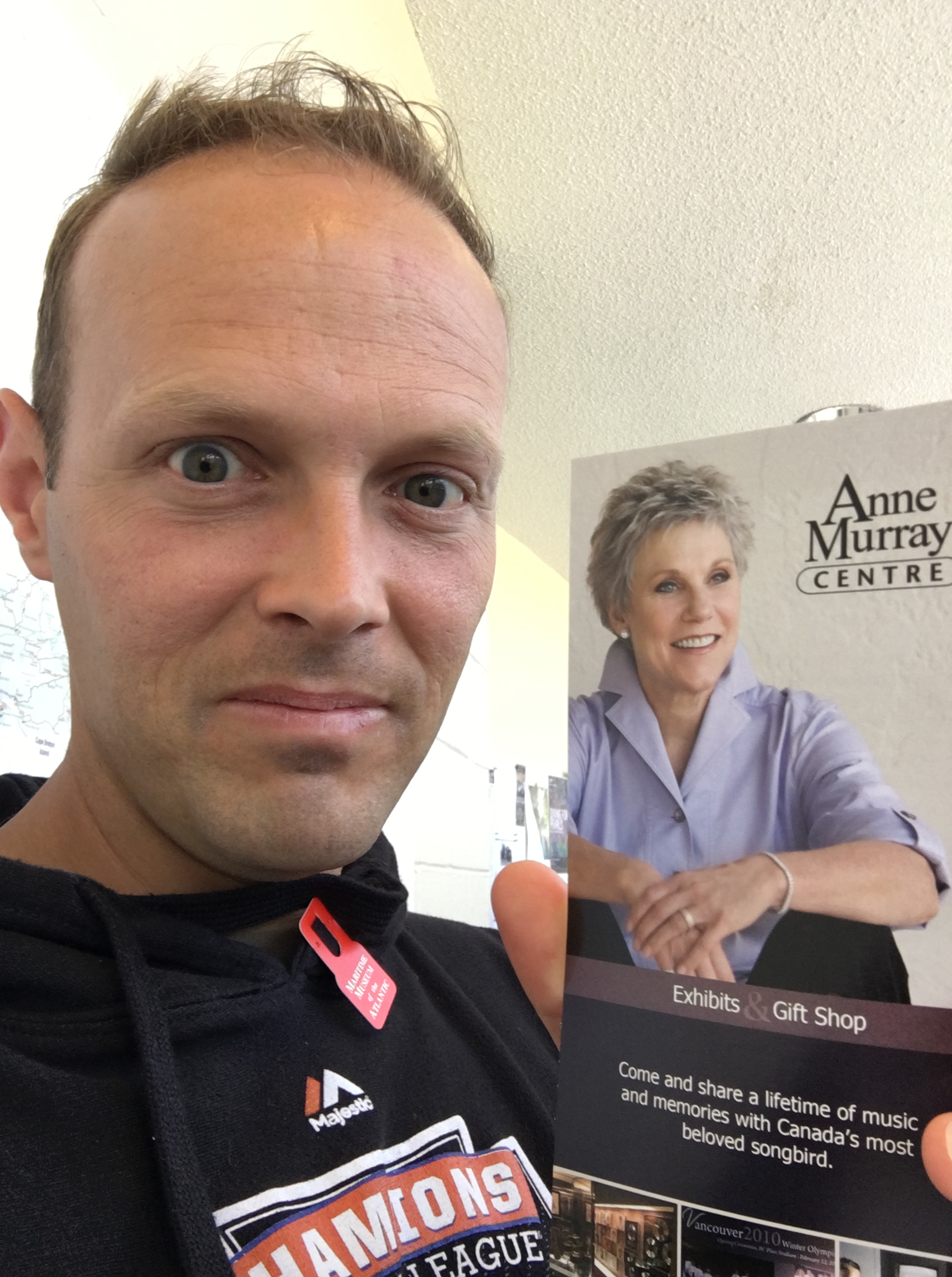 Spread your tiny wings and fly away…

On our drive into Halifax late last night (really, very early this morning) I passed through the town of Spring Hill, NS.  When I was a kid, my mom had a cassette tape (remember those?) of Anne Murray’s greatest hits that she would play on road trips.  Stop laughing.  Looking back, it reminds me of how my kids do things repeatedly that are torturous to me and yet I simply adapt and eventually come to embrace.  For instance, my son is in the habit of responding to things that excite him by screaming his enthusiastic reply.  It’s not really his fault.  He was born without the gene that regulates volume.  My daughter has a habit of speaking with a  Texas accent.  Again, not really her fault since we’ve been raising her in Texas.  Even my dog Buddy has his own peculiar tics like biting me when I attempt to get into my own bed at night.  You hear me, Buddy?  That is MY bed.  I pay the mortgage, not you, dog.  Don’t look at me that way.  Ah, I’ll just sleep on the couch.  Where was I?  Yes, all of these things, given time and exposure, tend to take on an endearing quality to them.  After a while I scream things back at the boy and we laugh.  “HEY DAD!”  “HEY SON!!!”  I slip into a cowboy drawl for the girl and we laugh.  “Ahh luuv y’all, Big Daddeh!”  “The wo-ahh ended, darlin.  No-ath won.”  I sleep on the couch and Buddy laughs.

Mom played the heck out of that tape and after a while the music of Canada’s first successful female vocalist just kind of crept into my brain and, like every other thing I’ve ever encountered, it stayed there.  Am I embarrassed by this knowledge?  No.  I will go on Jeopardy one day and Alex will say “And now the categories…  Canadian Singers Named Anne Murray…”  And you will laugh.  And I bring this up because the highway signage last night could not be missed.  “Anne Murray Centre – Next Exit”.  Two things.  First: Someone really ought to tell our Canadian friends that center ends in “er”.  Second: It’s too bad it was 2AM or I would have stopped right then.  You see, I’ve wanted to visit this shrine ever since I heard it existed.  It’s kind of like how people who’ve recovered from polio all flock to the Iron Lung Museum or how some people grow up to become Admissions Counselors.  Some kind of early life trauma drives us to conquer our fears by visiting such places and achieving closure.  Plus, they have a duets recording booth where I can sing “Snowbird” with the legend herself!

DAY 24/I Guess It’s A Seafaring Town Then…

What a day we had today!  My dear wife let me sleep in a bit.  God bless her.  I was beat after that drive.  The things we do for our Christendom family; but you are all worth it.  We planned to spend the day in Halifax.  The history of this truly charming city is tied up in the sea with a sailor’s knot.  Halifax Harbor is one of the largest natural harbors in the world and remains ice-free year-round which is important around these parts.  It is the last out-bound and first in-bound stopping point for any trans-Atlantic voyage so it has served as a supply port, port of call, and rescue launching point for centuries.  Seemed only natural to start the day with a trip to the Mariners Museum on the waterfront.  While there we explored the history of the Titanic – yes, that one – since my son is, like his old man, an aficionado of disaster history.  Just last week we watched a special about the career of Christina Aguilera.

What shocked us more than anything was learning (for the first time) of the Halifax Explosion of 1917.  Got a second?  Yeah, it’s that interesting.  Two ships collided in the harbor.  One of them was carrying munitions.  When I say munitions, I’m talking somewhere in the neighborhood of 20 tons of TNT  among other volatile explosives.  Initially the one ship caught fire and people came out to gawk from the shoreline.  Bad move, people.  When that conflagration reached the cargo holds all hell broke loose.  2,000 people were killed in the subsequent explosion.  A smokestack from one of the vessels landed miles away.

How had we never heard of this?!

The city of Boston was among the first to send help.  To this day, Halifax supplies Boston with the latter’s official Christmas tree each year in thanksgiving.  And it’s only right that others would help Halifax.  Just five years earlier Halifax had sent her best ships and seamen to recover bodies from Titanic’s wreck.  Many of those who were recovered were buried in the city’s cemeteries.  After a stopover to visit the cathedral for a trip through the Jubilee Year Holy Door for the indulgence (see pictures), we headed to Fairview Cemetery, resting place of at least 130 bodies who’s souls went home that night.

Our final stop of the day involved a drive south a half-hour to the coast and a town called Peggy’s Cove.  Peggy’s Cove is a windswept, rocky, coastal plane.  It is everything I picture when I think of the word maritime.  It is also home to the Peggy’s Cove Lighthouse (officially called Peggy’s Point Lighthouse), one of the most recognizable lighthouses in the world.  Hopping out of the car I was instantly knocked down by the gale.  I got back in the car and pulled on my brand new “RMS Titanic” anorak for warmth.  I believe my daughter had been carried over the next hill by the wind.  I got back out and got knocked over again.  This time I picked my head up slightly and, as I was extending my hand for balance, I took note of the Gorton’s Fisherman reaching to help me in my ascent.  “Wow,” I thought.  “I must be dreaming.  And this guy is super nice for being a fictional pitchman.”  Turns out it was my son.  The fog and his new “RMS Titanic” anorak made him look rather like Captain Ahab.  We walked out to the lighthouse together and met up with my daughter, now trudging back from the neighboring potato fields and quite angry, in time to get some live video out and take some incredible family shots as the sea, angrier than my Rita, assaulted the shallow rock cliffs behind us.

On our way back to the hotel we discovered something by shear dumb luck.  A half-mile from the parking lot was a sign that said “Swissair 111 Memorial next left”.  Disasters.  What is wrong with us?  What’s up with Nova Scotia?  Again (and total truth here) Benedict and I have watched a show called Why Planes Crash and this flight was a feature on an episode.  It crashed five miles off of Peggy’s Cove.  239 people died.  I remember it happening when I was in college.  We visited the spot and prayed for their souls.

Finally it was back to the hotel where the official mascot of the front desk, a chocolate lab named Cocoa, greeted us with a wagging tongue.  Good thing I specified that she’s a lab or that would have been the strangest greeting from a front desk ever.

DAY 25/There’s More to ‘Scotia than Halifax You Know 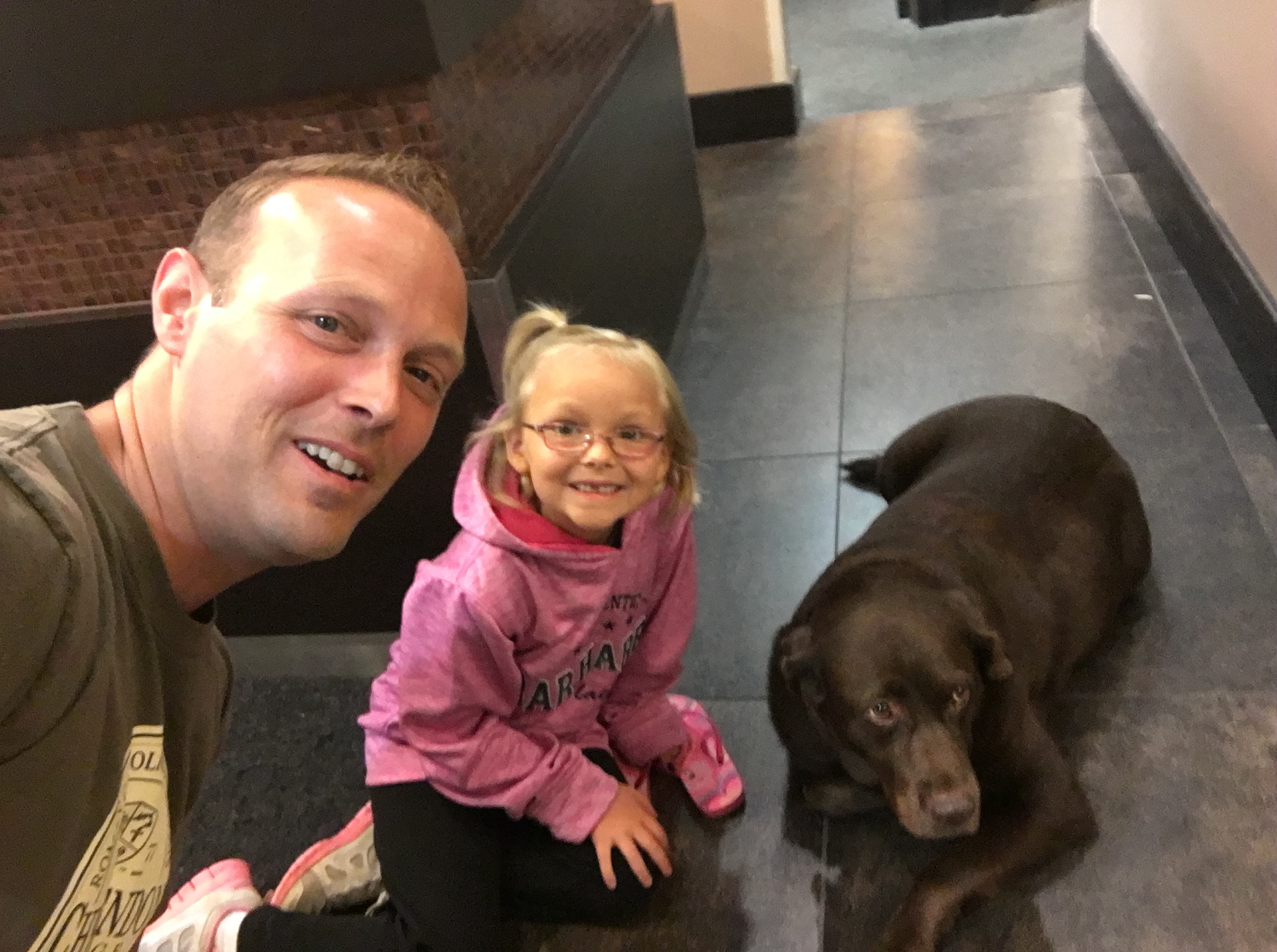 On Wednesday we set out for the town of Antigonish, home of our fellow alum Clare (MacDonnell) Lazuurri, ’98, her husband Brian, and their five kids.  Our event with them is tomorrow night but since we’ll be a day early we’re meeting for the afternoon and dinner.  Thanks to our kids we made the two hour drive last a little more than four with no fewer than four stops.  Ever heard of Tim Horton’s?  I believe Horton was a hockey player.  Let’s go with that.  He was Canadian so he probably played at some point.  There is a chain of donut shops throughout the Dominion bearing his name.  I really like them.  My son does too now.  Yet when we stopped for lunch in the town of Stewiacke we somehow missed a sign telling us that we were now closer to the pole than the equator.  Again, we’ll drive to the far ends of the earth for our Christendom family (and because this is really awesome).

When we finally arrived at Clare’s she was just as I remember her.  That’s right, I actually know Clare going way back.  Because of my sister Barbara, who knew Clare first, Clare would come to our house in New Jersey on breaks and stay with us.  There are some truly funny stories to share.  For instance on one occasion we all went to a taping of the talk show Sally Jesse Raphael.  Why?  We have a friend who was one of Sally’s producers.  We got to hang out in the greenroom with the guests beforehand.  I still remember Clare telling us when we took her into a Dunkin’ Donuts in Jersey how she was more familiar with Tim Horton’s.  So anytime I’ve been into Canada since then I’ve always stopped at a Tim’s and thought of Clare.

Not only was it refreshing to see that she was the same Clare but a joy to see that she has such a beautiful family.  Brian – her husband – joined us after work and offered me a gin and tonic because he, say it with me: reads the blog!  Her oldest daughter has an amazing mind and delighted us with stories about the Halifax Explosion.  She gave us more details and a better perspective than the museum had.  “I love history,” she said.  Clare added that both she and Brian were history majors so it must have rubbed off.  Then Grace, her daughter, told us a curious tale about life in the mines of Cape Bretton Island.  She knew we’d be heading there next and visiting a mining museum.  Keep this phrase in mind for our next installment – “pit ponies”.  All will be revealed.

After dinner with the family, a priest-friend, Clare’s mom, and Clare’s friend Karen (who graciously put us up in her house around the corner), we headed to bed eager to see what fun things Our Lord has in store for us tomorrow, wondering how we’d make Him laugh with our plans, and hoping that in the end whatever our day was like it would be pleasing to Him.  Countdown to the Anne Murray Centre: T minus-2 Days.  I’ll have to check my official “Welcome to Canada” gift bag Clare gave us to see what fun things I can bring for the car ride to Spring Hill.