Some rather interesting things have happened to us on this trip.  I should rephrase that.  Some rather interesting things have happened to me on this trip.  But then again, they always seem to find me, the crazies.  Here’s one example.  At our hotel last evening I had occasion to visit the front desk.  I was preparing to do laundry and needed to change out a 5 dollar bill into quarters.  There was indeed a sign in the laundry room indicating that change was available at the front desk.  I stepped up to the counter and asked, most politely, if I might be able to change the bill.

The woman behind the counter had eyes a different color than mine.  Her hair was a different color.  Also she was black.  I’m sorry.  I don’t do the PC thing.  Truthfully, our skin color is as relevant as our eye color.  You’ll see my point in a moment.  She commented on how lucky I was because normally they don’t make change for people.  In my case, though, she would make an exception.  Then she went to put stacks of quarters on the counter.  However, I had already reached my open hand out so she could simply give them to me; kind of like how you might receive change at a drive-thru.  Then she said the most bizarre thing I’ve heard this whole trip.

“You’re brave,” she said.  “Some people don’t want to let me touch their hands.”  I looked around for signs of leprosy but didn’t see any.  Also, her dialect indicated that I had wandered onto the set of North and South.  “But you’re not just a friend, you’re my brother,” she said awaiting a response from me.  “And you’re my sister…?” I replied, not really questioning since I believe we are brothers in Christ, just sort of trying to roll with this dialogue.  Listen, I was tired.  When she followed up with “I love you” I knew I needed to end it.  I headed toward the elevator and hid from Semiramis, completely forgetting I had left laundry by the machines.  Don’t worry.  I returned and we’re wearing clean clothes now.

Packing the car once again we headed north toward Chicago.  America’s 16th windiest city (I still remember that fact from a Trivial Pursuit card years ago) has a magnificent skyline.  Driving in, the kids, had they been focused on anything other than their TV’s, might have noticed that.  On Lakeshore Drive I even remarked to Karla that I felt like Clark Griswald.  “Over here, kids, you can see Soldier Field where the Bears Play…”  Nothin’.

Remember the saying that “One man can make a difference”?

My daughter is afraid of heights.  I dropped the girls off at Navy Pier while Benedict and I drove to 233 S. Wacker Dr.  Hehe.  If you didn’t know (and I did because of a Trivial Pursuit card – must have been the Chicago edition), that’s the address of the Willis Tower, tallest building in Chicago.  Until a couple of decades ago it was tallest in the world.  Ben and I made it to the top and took in the view.  They have a feature called “the Ledge” where visitors can step into a four feet deep glass box affixed to the edge of the building.  Ben kept taunting me that he knew I would be scared to venture out.  Being brave for my son I approached.  Guess who chickened out?  If you guessed the little guy, you’d be right.

After stopping for a deep dish pizza we headed to Muskego, WI.  Muskego is the home of Joe and Terry Sommers.  Joe offered to host tonight’s event for us and we couldn’t have been more excited.  Joe attended Christendom from 1978-1980.  What I love about this guy (in addition to offering us the use of his beautiful home) are the stories he told us about his time at Christendom.  “Yes,” he said, “I knew Walter Janaro.

Let me stop for a moment.  I don’t mean to make this all about Walter but, come on people…  Other than Warren Carroll, can you think of anyone else quickly who most pops into mind when you think of Christendom?  Walter has been a mainstay – I would dare call him “Mr. Christendom”.

Joe told me how a kid from Wisconsin first came to Christendom when the school was still in its infancy.  There were about 20 people total then and the campus was not in Front Royal yet, but in Triangle.  Remember the saying that “One man can make a difference”?  Joe heard Dr. Carroll speak at an event in Wisconsin and decided that Christendom was the place for him.  And we’re so glad he made that decision because every person in those early years paved the way for what we’re doing here today.  Without the Joe’s of our world, Karla and I would not have met.  I know it’s a stretch but I believe we all play a part in God’s Will.  Joe Sommers, thank you!

The evening saw other guests, too.  Ryan Jones, ’00, and his wife Angela (Formol0), ’01 joined us.  Ryan is another alum with whom I felt an instant connection.  They say that when people are forced into a traumatic situation together they tend to bond quickly.  Watch the video from the night and you’ll see what I mean.  And Ryan, thank you so much for being a good sport.  You’re awesome, dude.  Rachel (Lancour) Denno, ’05, and her husband Tim joined us and kept us laughing with their tales.  Also joining us were Joe, ’08, and Leah (Marsh) Hichborn, ’06.  Joe was delighted to be recognized as… Mike Hichborn’s baby brother.  Who wouldn’t be?

And here again we had another Louisville situation on our hands.  Some of the people who attended were happily surprised to find other Christendom grads living within 6 miles of them!  Karla made her “presentation” before handing out shirts.  Yes, everyone here had filled out the survey.  We continue to hope that the regional pockets of alums will take the initiative to keep this going.  As much as Karla and I would love to travel like this every summer it will have to be up to you, the alumni of Christendom to keep the Grill’n & Chill’n spirit alive.  Fortunately, we know you are up to the task.  And we’ll help when and where we can. 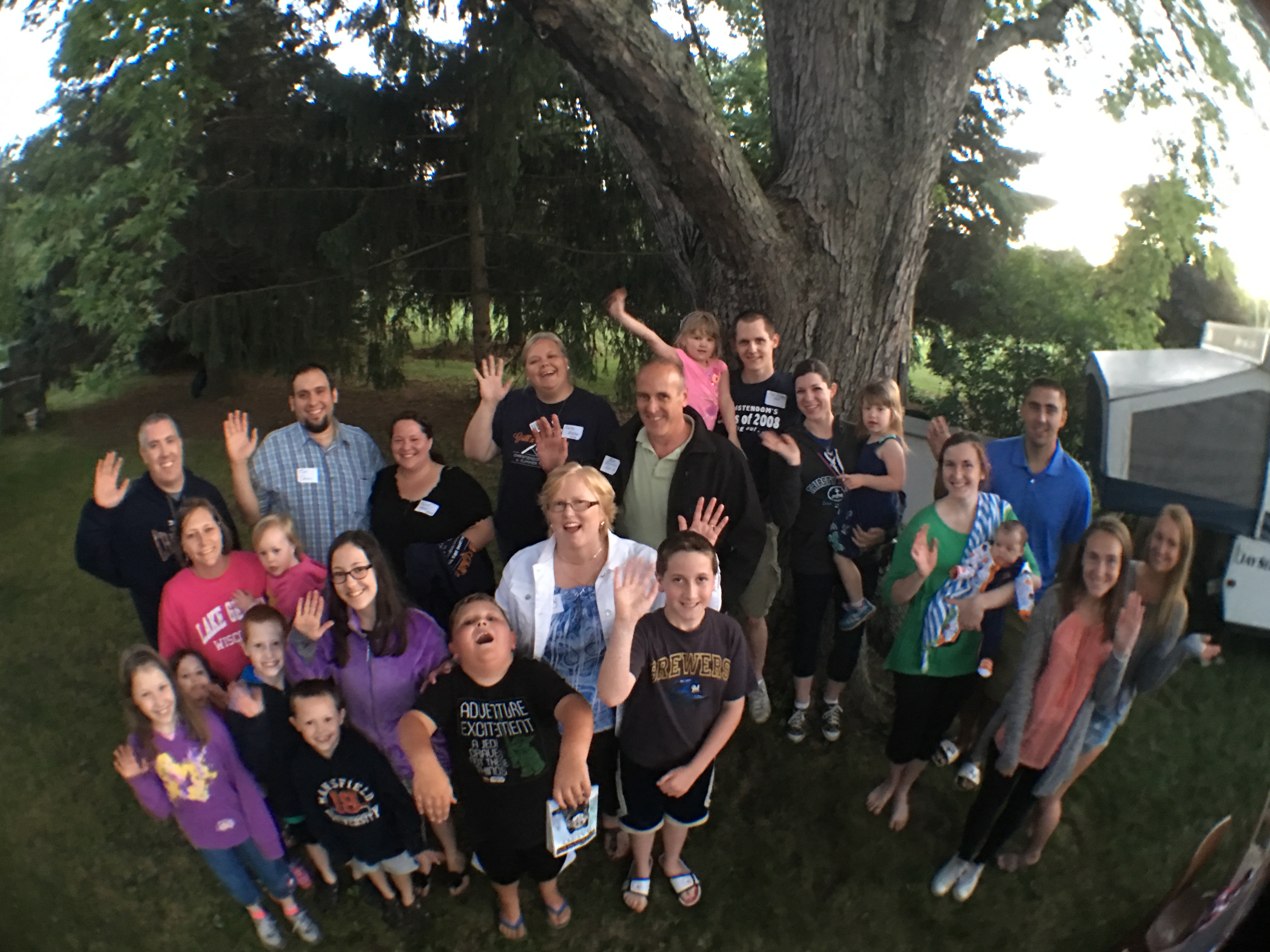 After saying our goodbyes, we headed north to Wisconsin Dells for two days of rest (for us and the kids, who need it most).  Keep those prayers coming, folks.  Our next stop is in Minnesota this Friday night.  Hope you can join us in spirit, in person, or online.