After leaving the Sommers’ abode outside of Milwaukee and saying goodbye to the eloquent Ryan Jones we headed northwest.  It has been our habit when wrapping an event to drive at least a little farther that night before stopping.  People have asked us “Where do you stay while on this trip?”  That’s usually followed by “Christendom is paying for all of this, right?”  On the second question…  No.  Believe me, we wouldn’t be doing this if we didn’t believe in the mission of what we’re doing which is ultimately the vision of Warren Carroll.  And we’ll be OK in the end.  No, we did not pay for all the tee shirts.  I do have my limits.  But as far as the first question is concerned the answer is that we have stayed about half the time in the homes of friends along the way who have offered and the other half in hotels that we typically book while driving using Priceline.  Regarding Priceline, we’ve only been burned once.  That was in Rapid City, SD about 8 years ago.  That’s not a bad track record considering how much we use it.

We knew that we needed a few days to “chill” for ourselves and the sake of our children.  As I posted on Facebook the other day, they’ve been remarkable but they are starting to show signs of cracking.  They are, after all, only 6 and 8 years-old and we are asking a lot of them.  It’s one of the reasons I keep asking for prayers.  Knowing we wouldn’t have another event until Friday night we decided to take the time and devote it entirely to their pleasure.

Wisconsin Dells bills itself as a resort town.  I’m not sure exactly how true that is.  What I can say is that this town of about 2500 is a decent place for a family to relax when passing through the upper Midwest.

So what is this place anyway?  Well, Wisconsin Dells lies about an hour and a half north-northwest of Milwaukee along I-90/94.  That’s about 45 minutes north of Madison if you’re wondering.  And the truth is that there really isn’t a whole lot here that isn’t oriented toward family entertainment.  No, it’s not like a cleaned-up Vegas nor is it a miniature (very miniature) New York.  The Dells became a tourist draw all the way back in the mid 1800’s due to its mild-cool summer climate and natural beauty.  The Wisconsin River runs through town and over a series of waterfalls creating a number of small lakes perfect for fishing, boating, or swimming.

With all that pristine water right there it was only natural that some local businessmen decided to try keeping everyone in town indoors to play in treated water, right?  Since the later part of the 20th century Wisconsin Dells has been known as the “Indoor Waterpark Capital of the World”.  I looked it up.  It’s true.  In 1978 two brothers opened a place called Noah’s Ark.  Complete with large plastic references to the “two-by-two” story of Genesis, this park is what we now consider a standard waterpark.  Covering a good bit of land are slides, a lazy river, and two wave pools.  And according to their signage this is the largest waterpark in America.  Again, I verified this.  It’s true.

But that’s all outdoors.

The same brothers, in the 1990’s, decided to capitalize on the popularity of their park and several others that had sprung up over the years.  Recognizing that Wisconsin’s winters are not conducive to outdoor activities when one is semi-clothed the constructed an indoor park they called Black Wolf Lodge.  If you’re thinking that sounds an awful lot like Great Wolf Lodge that’s because it is the original – as in very first – lodge in that chain.  They changed the name later on but it’s all right there.  Now it seems that every other street in this town has an indoor waterpark and they all seem to be quite popular.

Sometimes I come away from a new place with an idea in mind – something that I’ve seen that makes me say “I need that at home!”  Sometimes, not so much.  For instance after leaving Noah’s Ark with the kids and Karla I said “We need a pool with a swim-up bar at home.”  However, never have I ever left a sporting event and said “You know, I think a trough urinal would complete our bathroom.”  Ladies, if you don’t know just ask your husbands if you dare. 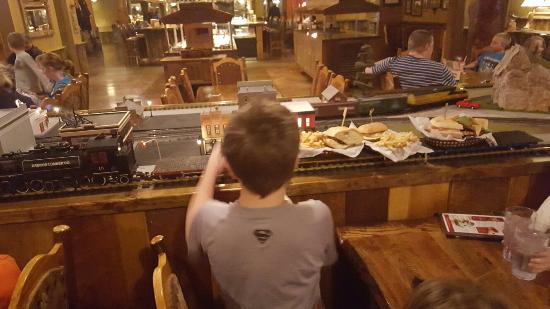 Not the O’Jay’s Love Train but it’ll do.

So that was it.  We had two days of fun.  We got to rest and recharge.  The kids had a blast and we even went to dinner at a place in town where our food was delivered to us via an O-gauge model railroad that ran on a track next to our booth.  Too bad the train operator (somewhere back in the kitchen and presumably watching us somehow) was quick on his feet.  I tried my best to send back ransom notes on the train when it made its return from whence it came.  “The cheese fries were cold.  Send them hot next time or I’m keeping the caboose.  Choo choo, baby.”  The place, by the way, is called Buffalo Phil’s and I believe it’s a chain.  Check ’em out if you have a chance.  We really enjoyed ourselves and that’s not just the gin talking.

Speaking of notes…  You might remember how my daughter lost a tooth in Indiana.  On our check-in to the hotel in Wisconsin Dells, someone finally remembered to rectify the MIA Tooth Fairy situation.  Digging into my pocket I found a Canadian $2 coin (affectionately known as a “twonie”), grabbed the hotel stationery, and jotted some lines.  I like to make it personal.  In the morning she was happy.  Good luck spending that twonie, sweetheart.  But because I’m a good dad (or at least I feebly try to be) I tossed in an American five dollar bill as well.