Grill'n and Grill'n in Minnesota

Allow me to take you behind the scenes in the production of a blog..

It takes many things for a writer to write.  These are the things that must be in place before the writer actually starts writing.  These include:

Today, however, it takes just one thing that trumps the others.  That would be prompting from one’s wife.

Are you going to write that blog yet or what?

So here we go.  Apologies up front if this rambles, is incoherent, or causes temporary loss of hearing.

For the record, he’s older.

Leaving Wisconsin Dells we toured a stretch of America’s Dairyland before stopping at an unusual location.  We spent about an hour in a small town called Black River Forest so I could get an eye exam.  I had lost a contact in Nova Scotia and got tired of wearing my glasses.  The problem is that my prescription was a few months out of date.  Yours truly got to look into the little machine with the out-of-focus farm house and received a puff of air to my corneas.  All this was by way of being handed a box with a subsequent slip of paper telling me what I already knew.  My prescription has not changed.  Talk about a racket.  But at least there’s one less doctor to visit when I return to Texas.

Back on the road we headed a few more hours to the western suburbs of Minneapolis.  We had no event planned here except a personal get-together.  My brother Edward, ’95, lives here with his wife Eileen (also ’95) and their kids.  Unfortunately, some of the family were a bit under the weather so we met Edward and three of the kids for dinner.  One of the kids is a current Christendom student – my niece Malia, ’19, who also happens to be the niece on her mom’s side of Christendom professor Matt Tsakanikas, ’95.  But before we sat down to eat, Ben and I got our hair cut while the girls got their nails done.  It’s nice to get freshened up every so often.

Then it was on to St. Augusta, a town about an hour northwest where we stayed the night with friends Chris and Jolene Sis and their lovely family.

What happened to day 33?  I just described it to you.  Pay attention much?  Today began much like any other except that Karla and I got to spend a little “alone time” together.  It’s not at all what you’re thinking.  Jolene graciously offered to watch our kids while Karla and I slipped off to… do laundry!  We also went to the post office and mailed a large box back to Texas in order to free up some space in the car.  Also we got filet-o-fish sandwiches from McDonald’s and then went to Sam’s Club.  Hot date.

The Sis family, though not alums, are part of the extended Christendom family.  They opened their home to us and, at about 5:30, a host of Crusader alums and their families.  One of those alums is Paul Moriarty, ’99.  Although I began my semester at Christendom in the class of ’99 Paul did not come in until the fall of ’96 so he and I did not previously know each other.  This is important.  You’ll understand why in a bit.

One of those who did not show up precisely on time was Erica (Quest) Faulkner, ’99.  She and her husband Bill and their three children arrived a little after the start time.  That’s only important because they were bringing the booze.  We won’t hold it against them, though, as we had plenty of drinks on hand.  We are always prepared.

When Erica, Karla, and Paul began talking the conversation looked completely normal to me.  All three participants were engaging one another, asking and answering questions.  “How’ve you been?”, “Do you still speak with so-and-so?”, “Remember that one?”  To the untrained eye there was nothing amiss.  Until… a few minutes into their chat Erica put her hand up and boldly announced “Paul, you didn’t speak two words in college.  What happened?!”  Paul’s response was as terse as Erica suggested he had once been.  “People change, Erica.”  Indeed they do.

Soon it was time to gather everyone for the group shot.  Just to name a few of the gathered, there was Jim McCoy, ’95, and his wife Ann Marie (Hicken) McCoy, ’96, as well as Michelle (McCoy) Hoeper, ’95.  Two things.  If you noticed a few McCoy’s in the pictures that’s because they apparently own the state of Minnesota.  Other thing is that Michelle Hoeper is actually someone from my past who doesn’t even know it.  Over on my other blog a few years ago I ran a contest asking my readers to recommend a family in need of some Christmas cheer.  We knew of a family back in Virginia who wanted to provide Christmas gifts to a family who might not otherwise have that chance.  Michelle suggested a family to us and we were able to facilitate the benefactor’s desire to give Christmas away that year.

And then it all went south..

A few nights ago my beautiful daughter lost her front tooth.  Tonight it was my turn.  The group photo was taken gathered around a towing trailer.  You know, I always try to stage the shot so it looks like we were actually in that particular part of the country.  I don’t know what a towing trailer says about Minnesota in particular but I’m from New Jersey and we don’t have them there so…  After the picture was snapped I walked over to the back of the trailer.  Chris Sis had been standing on the other end.  We do not balance each other out.  After a moment he stepped off the opposite end and I started to sink down toward the ground.  Not the end of the world considering my balance was actually pretty decent in that moment.

The problem arose when my son decided this was the opportune time to pull the pin out that had been holding the back gate in place.  Now that caused me to completely fall face-forward.  I instinctively covered my face as visions of up-and-coming supermodel Marla Hanson flashed through my mind.  Hanson worked in an industry where beauty was her stock and trade.  I travel the country on behalf of a college I barely attended and have an obligation to be pretty doing it (or similar).  Hanson was slashed by a jealous ex-boyfriend.  I was about to smack my face into wrought iron.  She got a movie of the week out of her deal.  I would get to write about it in my blog.  I told you I could tie anything together. 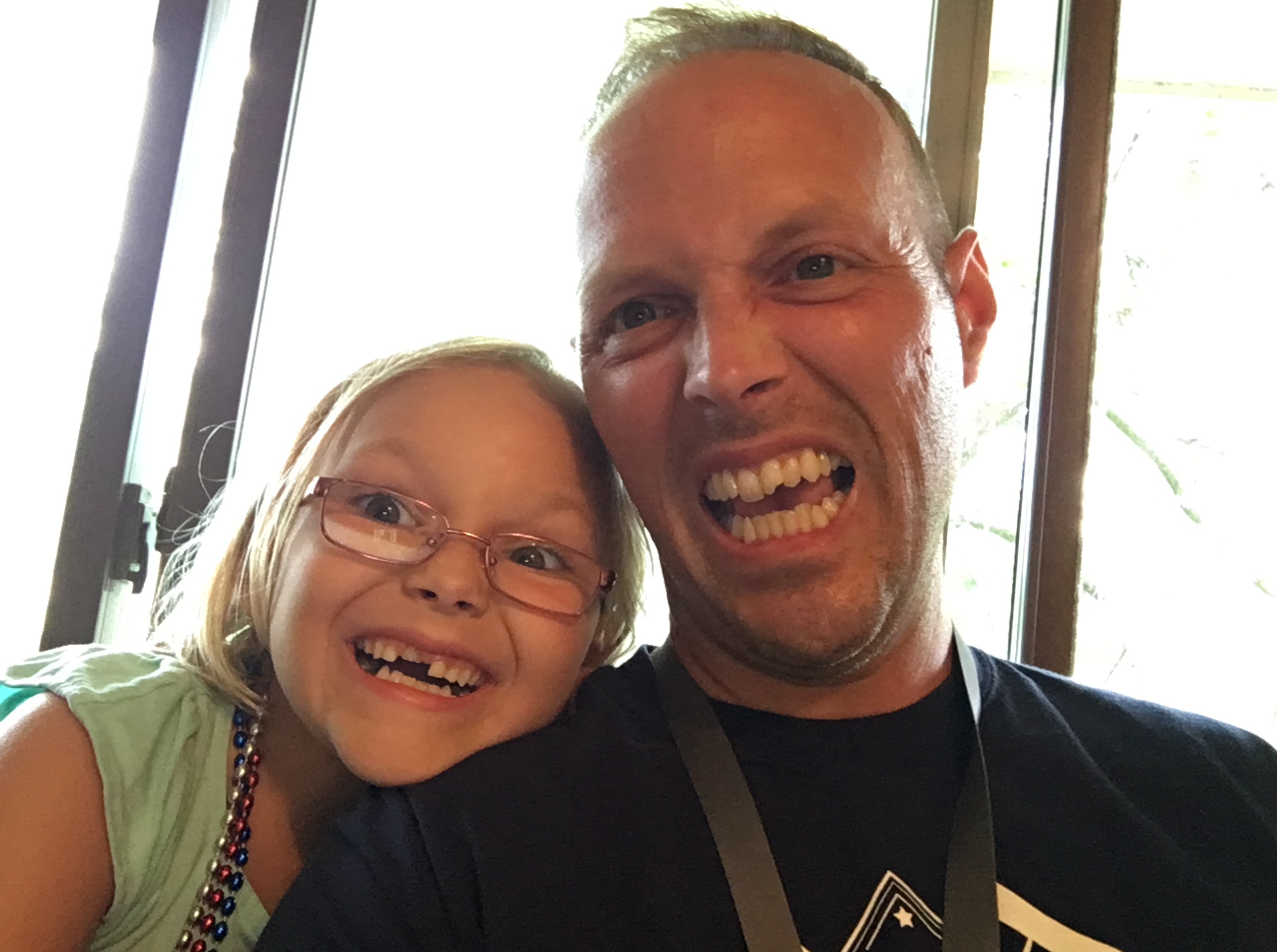 Either I’m getting old, I thought, or I may have had a good time with those drinks Erica brought because this didn’t really hurt.  Well, I take that back.  My pride was hurt as I arose and realized I was clutching a piece of my front tooth in my hand.  For the record, I hadn’t been drinking (much).  I think we’re just lucky that it didn’t crack at the nerve.  On the plus side I always wanted to look like a hockey player.  And until I get it fixed I’m telling people it was a bar fight with a lobster in Nova Scotia.

It’s going to be a long three weeks before we get back to Dallas and my dentist…  And you thought this trip was all fun and games for us.