Last night we arrived at our hotel.  Along our journey we have been blessed to be offered the homes of so many wonderful alumni families in which to stay for the night (or longer).  On about half of our trip we have stayed with friends or family.  Since leaving Nova Scotia we have spent the majority of our nights in hotels.  Hotels can be fun.  The best part, of course, is that there is no clean-up afterwards.  We simply walk away and drop a match.  Did I say that?  Well, we walk away anyway.  This hotel is a double-bonus for us as we will be bunking here for two nights.  That means we can leave our crap in the room at least one of those following mornings without the strain of having to cart it all down again.  I must say, though, that I’ve become a pro at that task.  I can fill up a luggage cart, push it down halls, onto and off of elevators, drag it to the car, and neatly place every mis-sized suitcase into a tight formation in the trunk of my car in a matter of minutes.  Go me.

San Francisco is one of America’s great cities.  True it has received (and rightly so) the moniker of one of America’s weirdest cities in the past 50 years.  Nevertheless, this city lacks none of its ancient charm.  I had only ever been here once before and then really just to pass through although I did visit Alcatraz and that was fun.

This morning we would be heading to brunch with two good friends of Karla’s.  They are Josh and Zack.  No, they are not “together”.  Karla first met Josh when he came to work with her at the company founded by Sean Garvey and Steve O’Keefe in the early 2000’s.  Zack is a friend from her days working as a ranch hand in New Mexico.  Josh, in fact, is really a part of our family.  Short of stature and possessed of more energy than most five year-old boys, we joke that Josh is like our child despite the fact that he’s our age.  Throughout our marriage he has lived in New York, Paris (yes, that one), and more recently SF.  And he has never failed to fly to visit us in Virginia and then in Texas.  He’s Jewish.  I only mention that because he chooses to spend Christmas with us every year.  He even flew out last December just to cheer me on as I ran my first (on last) 5K.  That race was a disaster for me but I did it and it meant a lot to have our good friend come all that way just to be part of it. 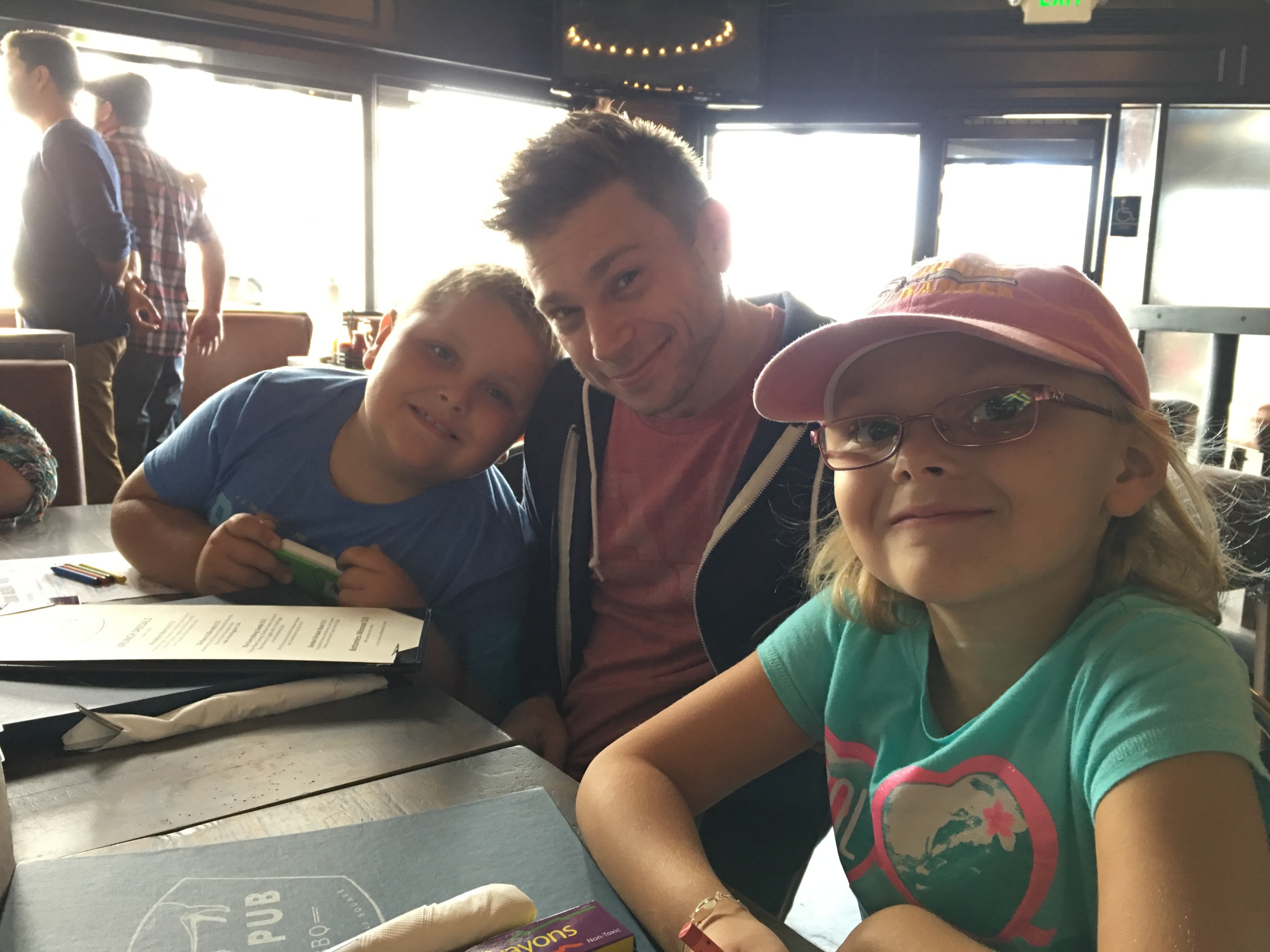 Our other child, Josh.

We met at a restaurant in Ghirardelli Square.  The first thing I noticed is that SF is a completely non-smoking town.  Imagine my surprise, then, when, as I was sneaking off to hide behind my car in the parking garage to light up, I passed by no less than three people all smoking a different kind of substance with complete immunity.  Shocking where priorities lie these days…

Zack had to jet after brunch but Josh was kind enough to play tourist and show us around town for the rest of the day.  First stop was Fishermen’s Wharf.  At the start of our trip we had picked up a National Parks Passport book so the kids could get a stamp at every park we visited.  Wouldn’t you know that the whole of the SF waterfront is considered one big national park?  We found the visitor’s center and got our stamp.  I highly recommend the passport to any of you who might be doing any kind of road travel in the future.

One thing I’ve learned about Josh is this.  He has no clue how human beings change their perceptions when they have children.  Years ago he came to see us in Virginia.  It was Thanksgiving and we all took an obligatory nap after dinner.  We passed out, straight up.  Not Josh.  He spent two hours rigging up an amazing sound system to our TV.  He does stuff like that.  He loves tech-y stuff and loves to do things for others.  Were I a single man with no cares I would have flipped at his skills and my new surround sound living room.  As a father of a seven month-old I flipped for a different reason.  “Josh,” I said calmly, “you know you’ll have to take that all down, right?”  Seems he wasn’t taking into account that a crawling, teething baby and a myriad of wires dangling from the mantle don’t exactly mix.  He was not pleased.  Today I asked “Josh, how far down is the place where we can see the sea lions?”  Came his reply: “Oh, just down there,” as he pointed up the block, “not far at all.”

Three hours later we had logged several miles of walking but we saw those sea lions.  My daughter came very close to using some of her “daddy words” – you know, the ones kids hear you say sometimes when you don’t think they’re listening that they know exactly when to use when you’re not expecting?  Yeah, those.  To the repeated chants of “I’m tired!” we marched back to our car.

Then it was time to explore Lombard Street – the crookedest street in the world.  You might know that SF is known for its hilly terrain.  Listen, I won’t lie.  I’m not a coward but as an adult I’ve noticed a problem I have with “fast” experiences.  I can go to the top of a tall building but driving up a steep incline at a high rate of speed sends me into a panic attack.  I was never like this and I don’t know what caused it.  Today I almost jumped out of our speeding car as Karla plowed straight up to the top of the tallest street in the city.

After leveling off, we drove across the Golden Gate Bridge, up to the top of a vista for a breathtaking view, and then back into town for some more of our driving tour including a stop at the Tanner House – the exterior of the home from the sit-com Full House.

The next morning we went to mass at what I now believe is the most beautiful church I’ve seen – at least on the West Coast.  If you ever come to San Fran, I beg you to visit St. Dominic’s.  After mass – which was heavy on chant – I walked around for pictures and the holy door tradition (not to mention the fisheye shot of the exterior).  I paused to get a picture of the confessional and a woman started speaking to me.  “They’re German,” she said as she pointed toward the wood carved paneling.  She then proceeded to tell me about how the original church had been destroyed by the 1906 earthquake and rebuilt; but the current church was almost demolished after the 1989 quake.  It took concerned parishioners twenty years to save this beauty from the wrecking ball.  I’m so glad they did.

Our afternoon was spent at the Presidio where I ate lunch from a food truck serving bacon, bacon, and more bacon.  We attempted to fly a kite with little success.

Next it was on to one of the most magnificent promontory points I have ever been to.  Josh directed us through winding streets (my panic attack subsiding for the moment) toward a peak overlooking the whole Bay Area called Twin Peaks.  I don’t know what my mother-in-law, sitting in the back seat, was thinking.  Well, I do know what she was thinking and that’s what makes it funny.  As we approached the final hill she piped up from the back: “Karla, do y’all want me to take the kids to a park or something while you’re busy?” she asked.  Immediately I figured it out and Karla and I burst into laughter.  You see, our dear Wilma had thought when we mentioned “Twin Peaks” we were talking about the restaurant chain not unlike Hooters where scantily clad women serve wings to men who are more concerned with the cup sizes of their waitresses than the beer on tap.  1) Yes, Texans do use y’all in a variety of ways.  2) Why on earth would we be going to such a place?  But the real Twin Peaks was much more fascinating anyway.  Finally we drove around more of SF taking in the sights before saying goodbye to Josh and heading back to our hotel.

The kids tucked in for the night, Karla and I plotted out our long drive down the coast which was to begin the next morning.  Stay tuned and stay curious.  There’s so much more yet to discover before we hit our next event in Burbank.