Of Broken Teeth and Broken Dreams

Those of you whom I was privileged to meet for Grill’n & Chill’n events this summer will generally fall into two groups.  There were the few here and there whom I had already met (and knew somewhat well) thanks to my marriage to Karla and through my siblings.  These are the Pierce’s, Belleville’s, and Lazurri’s of the world.  Then there are the vast majority of you whom I had never met.  From the Polley’s in Memphis all the way to the Akhurst’s in Mesa and everyone in between; let me state once again that it was sheer joy getting to introduce myself to you, sharing wonderful times with you, and hopefully building long-lasting friendships with you.  We are, as Sister Sledge famously sang, family.

But there are two other ways I can separate you.  Much like how the Incarnation divided time and we recall everything that was before Christ and everything that is since; I can break the groups of Christendom alums who participated in this summer’s very successful tour into two.  There are events that came before the evening of July 1 in St. Augusta, MN and those that came after and these divisions are fantastically clearcut.  Go back and read posts from before and then after that Friday night.  My writing took on a different tone.  Notice the pictures we posted.  I’m in a lot more in the pre-July 1 group.

This summer, my “breaking point” came on that fateful night.  Somewhere around 9:03PM, as we concluded our group shot, and some guests were getting ready to leave; something happened to shatter my smile forever.

That was the moment I broke my front tooth in half.

I remember that it did not hurt when it happened.  Nor did it really bother me for a couple of weeks afterward.  About a week before our return to Texas, though, it started to give me some trouble.  Last week, the day after we got home, I went into my dentist and had to explain the whole sordid mess to him.  Unfortunately, the prognosis was not great.  He would not be able to fix, nor even save the tooth.

Today I returned to the dentist to get started on some work.

Screenshot of my teeth in happier times. (Driving through Arkansas, laughing with Karla, day 1 of Grill’n & Chill’n).

Ever have a tooth pulled?  This is going to be fun…

First though, let me offer my apologies to those of you who saw me post-tooth.  Although my smile has never been perfect it was never terrible either.  At each event PT I tried my best to avoid opening too wide when speaking.  Laughing was a challenge because I tend to laugh a lot and to laugh hard and we had so much fun at our events.  Eventually I gave up caring and figured that most of you knew what was going on because you had been reading the blog. 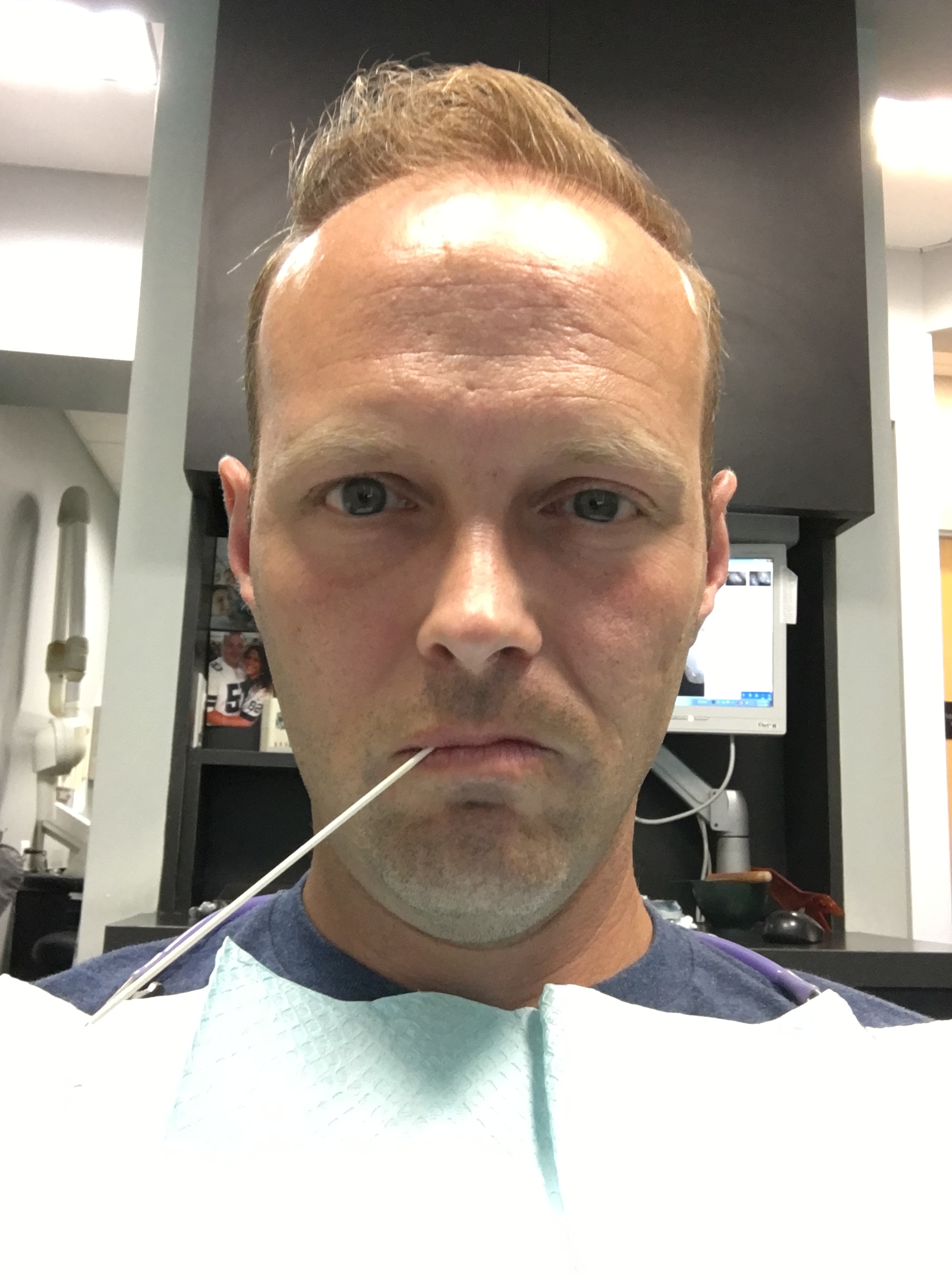 Even getting prepped for needles, my hair is still “Jersey strong”.

I arrived at the dentist and took a seat in the waiting room.  Within minutes my phone rang.  What was most peculiar is that the number on my screen was the dentist’s office.  I answered.  “This is the dentist’s office calling to confirm your appointment for tomorrow at noon.”  Long pause.  I stood up and walked to the counter where I looked across at the receptionist holding a phone to her ear.  Hoping not to take her by surprise I said in a rather hushed voice: “Turn around.”  She did and nearly dropped the phone.  “I’m right here.  The appointment is today.”  We laughed.  It turns out I had been double-booked.

After a while they took me back to an exam room where I grabbed the remote control for the TV and sat back in the recliner.  Sadly the only thing worth watching was HGTV and a show called Property Brothers.  Again, you all know of my love of the television arts and sciences so you could have guessed that I’m even familiar with the shows I don’t like.  In this show two Canadian identical twin brothers – one a realtor, the other a contractor – “help” couples renovate their houses, sell the houses, and then move into new houses.  It’s strange because they go out of their way to denigrate the current homes before selling them on much larger versions of the same house.  There is a format.  For instance, after quoting the couple a price for the renovation work there’s always a dramatic moment (right before a commercial break) where the one brother informs them that they’ve found mold, or they’ve discovered a beam needs to be installed, or some such nonsense.  The couple then has to wrestle with whether or not to continue the work.  The part I struck was much funnier.  I’d watch that show.

Rita insisted I come home with the tooth so I could put it under my pillow.  The dentist happily obliged.  He has a little girl too.

Two episodes later I had yet to be seen.  Then the dental assistant, a young woman who’s worked on my teeth before, began prepping me.  The dentist came in and reclined my chair to a flat position.  I could no longer see the brothers.  I was sad.  Shot full of lidocaine, I also could not feel my face.  He began drilling.  Basically he took the two surrounding teeth and ground them down to stumps.  Keep in mind that these two teeth were by and large healthy.  Then he sat me up for a bit and left the room.  Imagine my surprise when the couple on the screen had changed.  New episode.  “Huh,” I said to the assistant, “I don’t remember them being black.”   Dentist came back in and put me back down.  He drilled and drilled some more.

Then came a remarkable moment.  The dentist began pulling the broken tooth.  Immediately I heard a crack.  That was pleasant…  The assistant, looking from above into my mouth, blurted out “Wow!  I’ve never seen that before!”  The dentist added, “I did once but you sure don’t see it every day.”  They then continued this bizarre conversation alternating between shared disbelief and congratulations.

With many instruments still in my mouth I asked: “Whaeaet izth ick?”  They explained that when the bottom part of the tooth cracked off, the nerve, which was still alive, was left perfectly intact protruding like a string through the middle of the part of the tooth still implanted in my jaw.

Glad I could be of help in your quest to document medical freaks, guys.

Finally the dentist was done and so he left.  The assistant remained for the next hour to mold a temporary bridge that she cemented into place.  I had been instructed to rush home and start my painkillers as they “had to break the bone a ‘little bit’.”  Great.  While I was rinsing copious amounts of blood from mouth the assistant further instructed me not to drink hard liquor due to its acidity for at least 24 hours.  Beer, she said, was OK.  She almost looked tense as she told me this, like she was expecting a volatile reaction.  She must have been reading the blog.  In all seriousness, I turned to her and asked “What about my appearance indicates to you that I would be paralyzed if I couldn’t have a drink tonight?  Is this the dentist or the Betty Ford clinic?”

I went next door to the lab to have a color match done for the permanent bridge.  “Do you have anything in ecru?” I asked.  Juan, the color matcher did not get the humor. 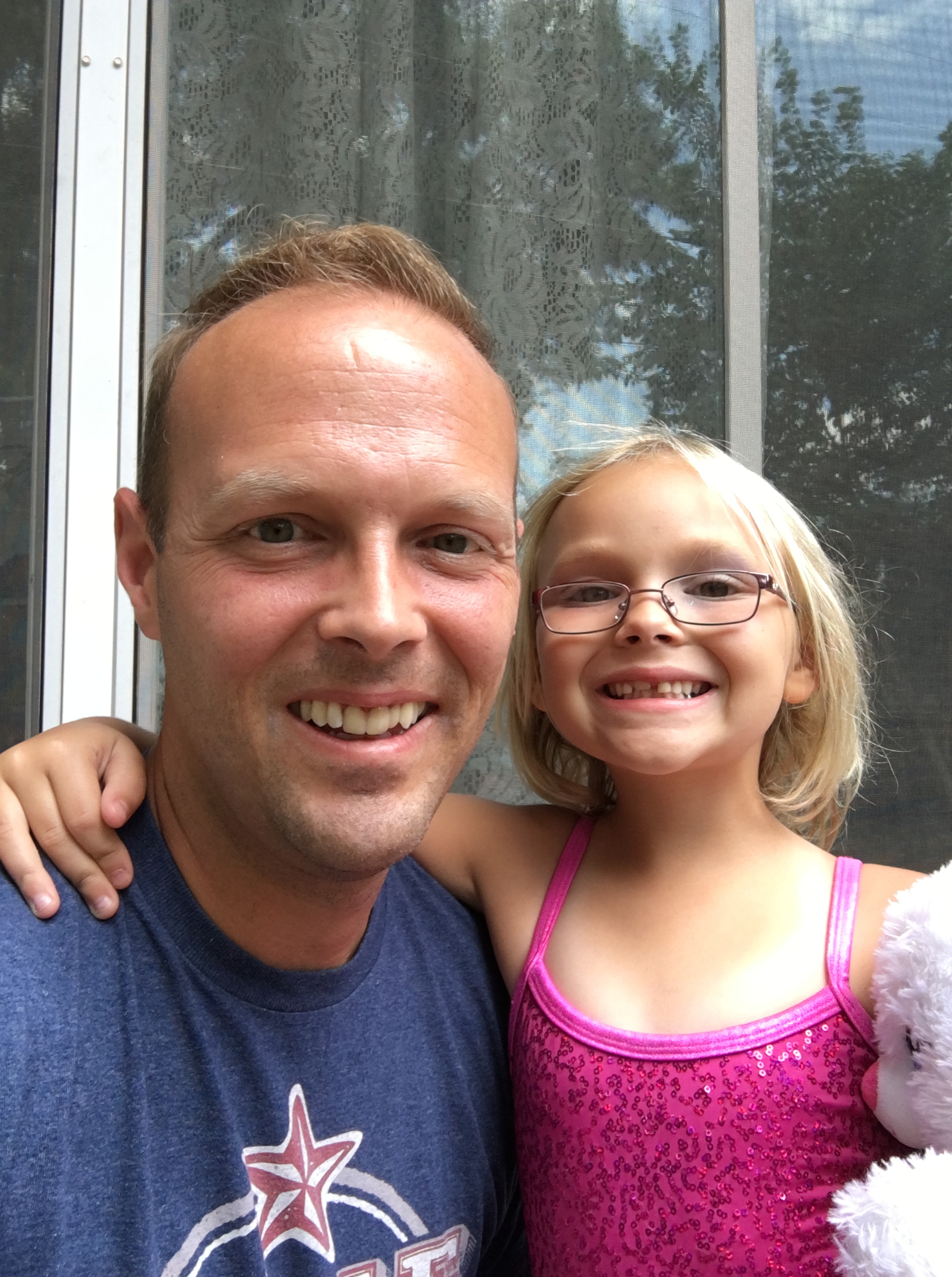 Though just a temporary bridge, I did not feel comfortable smiling yet.  Then this little princess asked for a picture with me.

All in all it was an eventful morning.  The good news is that I won’t look like a meth addict on the first day of school.  Also, the permanent bridge promises to be quite impressive.  My front teeth will be straightened out to “textbook” standards.  I assume that means a dental school textbook and not Saxon math.  Finally, and this is the best part, for any future Christendom gatherings I will be able to flash my slightly imperfect smile to all I meet.  …So, you know, like when that time comes when I’m asked to hit you up for class donations or a capital campaign or something.

There are still a few more Grill’n & Chill’n related posts coming your way in the next week so please stay tuned.  And if anyone has any suggestions about what to do with this blog after that, I’m all ears.  At least, that is, until I injure them at an event.